Election 2016: Trump and the GOP agenda will be a disaster for most people.

Posted on February 6, 2017 by Speakfaithfully 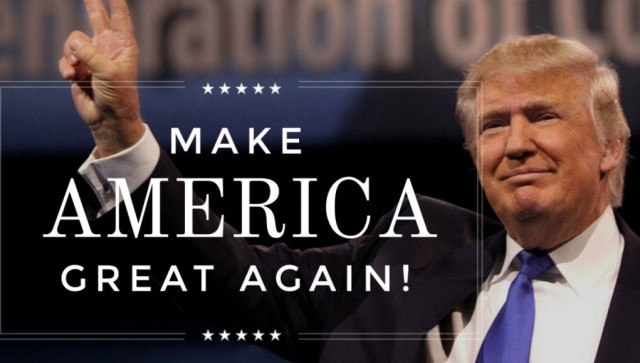 His actual slogan should be, “Make the Poor and Marginalized Suffer More”

I’m tempted to not even write this post as the first few steps of the Trump presidency and those in the coming weeks and months will make my point better than I can. However, for the record, I believe Trump and the GOP controlling our government for the next several years will be bad for just about every average person (the 99%) and really good for corporate and financial interests (the 1%). I say this for a number of reasons.

The overall GOP agenda is hurtful to the average person, and to marginalized communities especially.

First, the GOP supports our continued reliance on dirty energy sources in general and the Keystone XL and Dakota Access pipelines in specific.  This ignores abundantly available scientific evidence for human-caused climate change and the dangers of it that have been acknowledged even by the likes of Exxon and the DoD. This ignores the fact that renewable energy is becoming more profitable and employing more people than the oil and coal industry, creating jobs at 12 times the rate of any other sector. This ignores the fact that the coal industry’s decline is irreversible and will be long-term. This ignores the fact that the pipelines will not impact consumer costs. (The Keystone XL pipeline is shipping Canadian oil to Chinese consumers, and the Dakota Access Pipeline is cutting transportation costs for the companies behind the Bakken Shale fracking operations. Neither of this will result in gas prices at the pump being lower.) This ignores the fact that jobs that are created with pipeline construction are temporary and dangerous. The GOP is so in the tank for dirty energy that they have even pushed legislation to allow for oil exploration in national parks, though this was stopped by hunters and conservationists. While pursuing this agenda regarding U.S. energy may enrich large wealthy corporations that lobby and donate to the GOP, it endangers the average person economically and environmentally.

Second, the GOP is pursuing legislation that solves no problem or will fail to solve the problem they claim to be addressing. There are a number of transgender bathroom bills being supported by GOP representatives that solve no problem. There are not enough examples of transgender persons acting inappropriately in bathrooms, let alone a systemic problem with it, to warrant any legislation. The GOP has supported a ban on refugees from countries that have never attacked us, based on the fear that terrorist disguised as refugees might infiltrate our borders. Aside from two non-fatal attacks by people from the nations impacted by this ban, there have been no fatal attacks (terrorist or otherwise) from nationals of those countries. Additionally many more U.S. citizens are killed a host of domestic issues than by Islamic terrorism. Since 9/11, foreign terrorists have killed a U.S. citizen at the rate of about one per year. The greater terrorist threat we face is home-grown domestic terror threats from white-wing extremists which Trump and the GOP are going to ignore. Another example of this legislation is the border wall with Mexico.This will cost billions of dollars, even by the most conservative estimate, and it is clear the U.S. taxpayer will be paying for it. While undocumented immigration is an issue that needs to be addressed, building a wall is highly unlikely to resolve the issue driven by a host of social, economic and political factors. The GOP is pursuing legislation that solves fictional problems that does not exist, and is pursuing bad legislation that does not solve problems that actually do exist. This hurts the average person by wasting tax-payer money and adding unnecessary divisive legislation that is often discriminatory in nature.

Third, as the GOP is pushing pointless legislation it is paradoxically pursuing an agenda of deregulation, citing excessive government overreach and burdensome and needless legislation.  While some government regulation is without a doubt useless or even hurtful, they seem to be focusing on revoking laws that help us, keep us safe, or have widespread public support. For example they removed laws that prevented the severally mentally ill from purchasing firearms.  They have removed legislation that prevented coal companies from dumping coal ash into rivers. They are also intent on ending net-neutrality rules regarding the internet. By removing legislation in the name of “fighting federal over-reach” they are putting most people at the mercy of large corporations; many of these restrictions protected the average citizen from price gouging or environmental poisoning by companies looking to cut costs by taking short cuts and improperly dumping waste products from their industries.

Fourth, the GOP is pursuing tax reform that overwhelming benefit the wealthy elite. The GOP has continued to push for an end to the estate tax which would benefit only the richest in our society.  They are also angling to give corporations who have dodged taxes for years by stashing it abroad the option to bring it home to the U.S. at very low tax rates.  This is hurtful to everyone as it allows wealth to concentrate into the hands of the already incredibly wealthy, which they then in turn use to buy the loyalty of politicians so they can pass legislation that is enriching to them but is at odds with the interest of the average citizen.

Fifth, while Trump struck an isolationist foreign policy tone during his campaign, the GOP foreign policy has remained largely intact. In many ways the GOP is continuing the foreign policy of Bush and Obama, with the resurrection of the worst of Bush-era tactics. Trump has already provoked China, a near-peer nuclear super powers, and his closest adviser believes a war with China is coming within the next couple of years. Trump has authorized military strikes in countries we are not technically at war with, killing a number of civilians, including children, in the process. This militaristic foreign policy is hurtful to all of us.  Defense spending eats the majority of our budget, leaving little for other more beneficial social programs. Our endless Global War on Terror has not made us or the world any safer.  Any potential war with a near-peer nuclear super-power would leave millions dead and accomplish what exactly?  Also, any war involves the risk of death, disability, disease and displacement to the average person; it is not the wealthy who fight or stand to lose anything in these wars, it is the rest of us.

Sixth, the GOP will attempt to advance its policies around culture-war wedge issues, especially in regards to abortion and marriage equality. Beyond hurting the groups directly impacted by the imposition of “Christian values” through legislation, these types of legislation are also often counter-productive. This can perhaps be best seen in the looming actions regarding abortion. While appointing a Supreme Court judge that is pro-life may sound good, this judge is also very pro-corporation which will end up hurting the average person as the Supreme Court becomes more tilted towards the wealthy elite. Banning abortions, defunding abortion providers, defunding sex-education or supporting only abstinence only sex-education, and making it harder to access abortion are also not effective ways to decrease abortion rates. Increased sex-education and access to contraceptives (especially long-acting-reversible-contraceptives) are far better ways to lower unwanted pregnancies and abortions (and respect the rights of others in our pluralistic democracy). Pursuing a hard-line agenda on wedge issues hurts everyone as the pursuit of wedge issues deepens divisions in our country, making us easier marks for the wealthy elite, and are often not the best ways to pursue our goals. 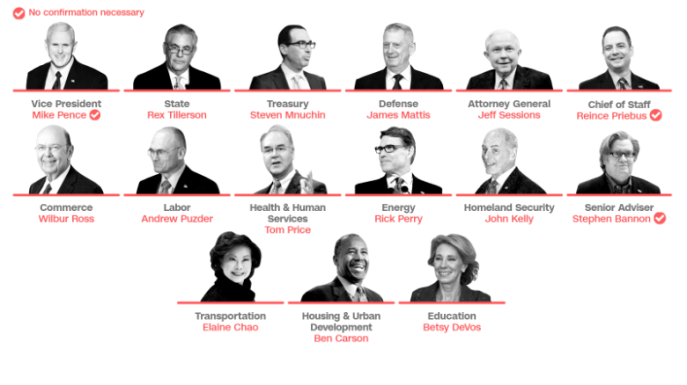 These people will help shape the future of our nation for their benefit.

Beyond the general direction of the GOP agenda Trump’s cabinet picks and close advisers do not bode well for us either. As his team assembled I felt like it was the #LegionOfDoom assembling, but with more money, more conflicts of interest and less competence.

Trump’s cabinet picks are marred by a mixture of deep financial conflicts of interest (DeVos, Tillerson and Price), racism (Sessions and Bannon) incompetence and a lack of government experience (Carson), torture apologists (Pompeo), with a number of them being clearly antagonistic to the very job they are supposed to do (Puzder, Pruitt and Perry) and a number coming from the very swamps Trump promised to drain (like Mnuchin, Ross, Cohn, and others joining his administration).

Given the number of corporate leaders and financial elites Trump has included in his administration at the highest levels, it is no surprise that this is the richest cabinet ever assembled. It should shock no one that this cabinet is already pursuing legislation that financially benefits the wealthy elite but puts the world at greater risk for another financial crisis. In many ways instead of “draining the swamp” of financial interests poisoning our democracy, Trump abandoned all pretense and put them in direct power instead of making them maintain the facade of a functioning Democracy by using lobbyists. This is a rank betrayal of any Trump supporters who hoped he would reign in corruption in D.C.

Trump and the GOP agenda will be a disaster for most people.

These trends are not going to reverse under Trump.

Overall, the GOP agenda appears to be a problematic mix of ineffective solutions to real problems that face us, hurtful solutions to non-existent problems, and legislation that will enrich the already extremely wealthy. Trumps advisers and cabinet members for the most part are problematic members of the 1% who will use their new positions to undermine the very roles they are supposed to fill in order to enrich themselves and their peers at great cost to the American people. The net impact of their agenda in the coming years will not “Make America Great Again” (however that was envisioned) but continue enriching the elite at great cost to the rest of us.

I am figuring out life and faith and taking other people along with me on my journey. Sometimes as fellow travelers, sometimes as hostages.
View all posts by Speakfaithfully →
This entry was posted in Politics. Bookmark the permalink.