Posted on September 19, 2012 by Speakfaithfully 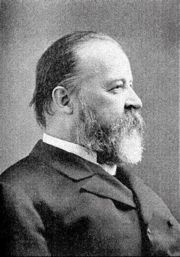 Fundamentalism has its origins in the U.S. in the close of the 19th century.  A large group of predominantly white Christians got together annually at the Niagara Bible Conference beginning in 1875.  This conference met in reaction to a perceived decline of moral and Christian values in the culture. Many of the leaders of this conference dispensationalists.

(Sidenote: Dispensationalists are Christians who believe in dipsensationalism.  This is a belief that arose in the 19th century that Jesus would return very soon and that God moves in distinct epochs, times marked by different dispensations of God’s spirit, throughout time.)

During these conferences the members developed a statement of fourteen articles of belief and faith that were believed to be the fundamentals of the Christian faith. A person had to believe and live by these truths or they simply were not a Christian. By the 1890s these had been further reduced to the Five Points Fundamentalism.

These five points are…

Now Fundamentalism is more than believing in these five points of doctrine. There have been many Christian groups throughout history that would affirm the Five Points of Fundamentalism but would not be correctly labeled as Fundamentalist either by themselves or by true Fundamentalists.

First, Fundamentalism is marked by excessive biblical literalism. Reading the Bible as literally as possible is believed to be the one true way to approach scripture.  This means a literal interpretation of scripture is done even when it is not historically, theologically, or textually required. This is why Fundamentalists are pretty much by default  Creationists, or Christians who deny evolution and believe the world was created in a literal six days. Fundamentalists would also affirm that Jonah spent three days literally in the belly of a whale, and so forth. Even with this hard-line stance towards biblical literalism, like all sects of Christianity, this biblical literalism is practiced inconsistently. One part of the Bible is read literally and others are not read literally and there is absolutely no explanation as to why this is done. Science is also inconsistently affirmed as some science (such as modern medicine) is acceptable to believe in and use but anything regarding evolutionary theory is categorically rejected.

Second, Fundamentalists lean towards Calvinism. This is a theological stream of Christianity with roots in the Reformation and the work of Jean Calvin. The leaders and founders of Fundamentalism were shaped by a Calvinism that came out of Princeton seminary and this has been infused into Fundamentalism.

Third, Fundamentalists are often dispensationalist.  This is not surprising given the number of dispensationalists that were at the Niagara Conferences. They look for the soon return of Christ and believe God has acted in different dispensations/ages/epochs throughout history.

Fourth, and perhaps most importantly, Fundamentalism is related to a defensive posture. They insists that the distilled body of fundamental beliefs, without which one cannot be Christian, are under attack and need to be protected.. Fundamentalists believe that Christianity, Christian values, their sect of Christianity, “family values,” etc. are under attack by forces in culture that hope to secularize everything. As a result, Fundamentalists have adopted a defensive posture against…well everyone else. The enemy that is against them, “The Other,” is sometimes left rather vague but has also been commonly identified as the liberals, the media, the LGBT community, the Democratic Party, socialists, communists, other religions (Muslims, Jews, Buddhists, Hindus, New Agers, Wiccans, etc.), feminists, other Christian sects that they see as false, etc. Within the Fundamentalists mindset, “true Christians” are Christians who hold fast to the fundamentalist articles of belief despite this cultural onslaught. And in order to resist this attack, “true Christians” and must be ready to defend their faith by any means necessary.

Fifth, this defensive posture is closely related to a rather black and white and fearful view of people and the world. Fundamentalists tend to live in the extremes and people are rather quickly and simplistically categorized as either “true Christians” or “the enemy.” People are seen as “One of us (Fundamentalists” or “against us (fundamentalists).” This labeling is often done on the basis of if a new person is an identified member of any group or community that has been identified as “the enemy,” if someone fails to affirm the Five Points of Fundamentalism, or if someone fails to adhere to the broader attitudes and beliefs I have just highlighted here.

The result of these beliefs and attitudes is not surprising. This sect is infamous, even within Christian circles, for being ignorant, belligerent and mean. Their defensive posture makes them paradoxically ready to attack.  Their “anti-everything-but-what-we-already-believe” stance and anti-science/anti-intellectual bent makes them poor conversation partners on just about any subject. As a result of this stigma, very few Christians would voluntarily identify themselves as Fundamentalists, even if they agree with some of the basic religious tenants of what self-proclaimed Fundamentalists believe.

Now there are many other groups, religious or otherwise, that have similar problems, attract similar people, and have rightly earned reputations for being ignorant and mean. So what makes Fundamentalism so problematic?

In fact, I do not believe anything I have discussed here is what makes Fundamentalism especially problematic. Every Christian sect, no matter how absurd, has some insights and some problems.  While Fundamentalism has many more problems than insights in my opinion, I still think there is some good in it.  For example Fundamentalists do take the Bible seriously, if they take the literalism too far, and there is an extreme concern for loyalty to God and their zeal (in the abstract sense) is commendable.

So what makes Fundamentalism so problematic and ultimately dangerous? I will explore this in my next post.

(Sidenote: For more on Fundamentalism I would encourage anyone interested to check out Ernest Sandeen’s book The Roots of Fundamentalism.)