Posted on November 22, 2012 by Speakfaithfully

Tomorrow is Black Friday, the day after Thanksgiving that has becoming a day in the United States that is infamous for deals and sales leading for Christmas shopping.

This two-day span represents an overdose of two things that are deeply problematic about the U.S.A.: a white-washed history that is ignorant of the consequences of colonialism and mega-corporations running rampant with our economy and politics.

Over the last several decades corporations have gotten larger and larger and more and more of the products we use are owned by single corporations.  Also, these corporations also own the politicians we think we vote for.  Money influences public opinion and the candidate with the most money usually wins.  When corporations are donating large sums of money to politicians who will be in charge of regulations that will impact the profits of these corporations…well, I think we can all agree this is at least highly problematic if not an outright perversion of democracy. Buying large numbers of goods from corporations for Christmas gifts only fuels their profits and increases their control over our society.

I encourage everyone two take two simple actions tomorrow in an attempt to address both of these issues and kill two birds with one stone.

First, join and support the workers of Wal-Mart by boycotting Wal-Mart tomorrow.  The family that owns Wal-Mart is in the upper echelons of wealth in the U.S. and they are  treating their workers like crap.

Second, do not buy your gifts at all at Wal-Mart stores or other corporations.  While the cuts these companies take and make might make their prices lower than competitors someone, somewhere is paying for it.  It is probably their workforce or some poor person in a third world country that is getting the shaft. Continuing the participate in the corporate economy is sometimes unavoidable but this time it is. 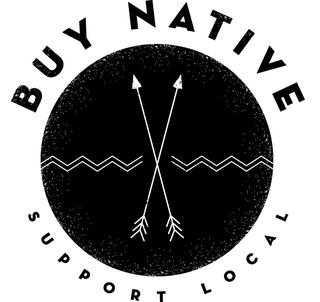 Instead of buying your gifts there, buy them from a store on the Buy Native campaign’s list.  Buy Native is a campaign started by Beyond Bucksin, and it is essentially a campaign to encourage people to buy from Native American owned and operated stores and/or Native American artists. Not only are these gifts unique and authentic but these gifts will help empower small local communities, businesses and markets here in the United States.

Native American artists, craftsmen/craftswomen, and entrepreneurs are taking full advantage of the internet and by buying their good you are helping people and communities that have it much worse than your lowest paid Wal-Mart worker. You would be at least doing something to address the gross inequalities colonialism has led to here in these United States.

I am figuring out life and faith and taking other people along with me on my journey. Sometimes as fellow travelers, sometimes as hostages.
View all posts by Speakfaithfully →
This entry was posted in Uncategorized. Bookmark the permalink.