Posted on October 27, 2013 by Speakfaithfully

Fall, the season of racism.

Every October people around the world get dressed up and attend various costumed parties or functions, usually in some connection to Halloween. Inevitably stories and pictures emerge of white people dressing up in racial or cultural costumes that some find racist and offensive.

People of many different cultures have been addressing this issue for some time.  There are even whole awareness campaigns based around it. Last year I did my part and I received my first suspension on Twitter for calling out numerous people on their racist Native American costumes. However, no matter how many times this is addressed, it happens again every single year.

This year I had not planned on writing anything but stories of racist costumes began to crop up on my news feed.

Colorlines ran an article about a girl in Australia who had an “African” themed party.  The result was a bunch of white Australians in blackface, African garb, and even (for some reason) KKK outfits.

Soon, there was the token celebrity blackface scandal.  This time it was Julianne Hough (of some reality show or another) who dressed up as a black character from Orange Is the New Black.

(Sidenote: The show Orange is the New Black is taking a problem disproportionately impacting people of color, namely mass incarceration, writing white people in as main characters, and profiting from it. More could be said about that, but I digress.)

Are people of color being too sensitive?

Now when people of color take offense and ask white people not to dress up in this manner the reactions are equally predictable.

“You’re being too sensitive.”

“That might have been wrong, but that was just one bad person.”

“There are bigger things to worry about.”

“No one is getting hurt by this.”

Oddly enough, sometimes when white people are confronted about their choice of costume, they assume the role of a persecuted victim. They, the white person, is the true victim of this situation.  Their freedom is being limited by an overly sensitive minority or an overly politically correct culture.

“This is political correctness gone too far!” is often a coded, “How dare you (people) tell me what to do!”

The cyclical nature of this discussion is discouraging.  Truth be told, part of the reason I had planned on not writing about racial/cultural costumes this year was because I was unsure the people who need to think about this more would actually listen.

Then I saw this image on Imgur. 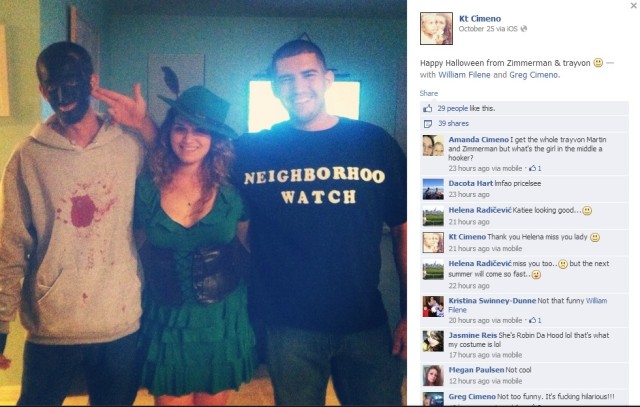 (The full gallery with a handful of additional pictures can be seen here.)

This is a picture of people who thought it would be appropriate and fun to don blackface and go up as Trayvon Martin and his murderer George Zimmerman. This is not an assumption from the context.  Their choice of costume is clearly stated in the photo album itself.

(Edit: They were also not the only ones to do this.)

I assume that just about everyone, including many who might defend the use blackface or racial/cultural costumes in general, will deem this specific choice of costume as offensive, inappropriate and too far.

I assume that many would respond that it is not blackface in and of itself that is the issue in this situation, but the larger context in which it was used. The reason this costume is unacceptable is because it invoked a tragedy involving the death of a real person, all for the sake of a laugh. While fake bloodstains might be a common sight on Halloween costumes, the bloodstains in this costume point to the death of a real person and it is therefore a callous and inappropriate Halloween costume.

What I mean by this is that part of the reason that white people should not dress up as other cultures is that they do so in a world where white people have violently repressed the very cultures they are dressing up as.

Blackface is tied directly to minstrel shows and the larger exploitation of black people during slavery and Jim Crow.  Native American costumes are based on stereotypes about indigenous cultures that the U.S. and Canada have attempted to eliminate through various programs of genocide, assimilation and destabilization.  Asian outfits are patterned after the very cultural outfits that were used by European colonizers to paint Asian cultures as effeminate and in need of Western domination and exploitation. Arab suicide bomber outfits point to dire situations and tragedies, often the result of Western meddling in the Middle East, that have produced the extremism and desperation that are required for suicide attacks to be carried out. Etc.

Racial/cultural costumes invoke this history, a history rife with tragedies and deaths, a history that continues to this day, regardless of the wearer’s intent or even knowledge of this history. I doubt the Australian wearing the KKK outfit knows about the origins and actions of the KKK, but one cannot separate that costume from its associations due to one’s own ignorance.

People of color intuitively remember and recognize this fact. We can see the bloodstains white people are blind to.  We see them because it is our ancestors, our bodies, our minds, our family members, and our communities that have suffered and continue to suffer these tragedies and deaths. Some white people from Western culture, with its disdain for history, its selective memory of the past, and its present tense attention span, appear to be blind to any injustices that did not happen within the last year. That is why they can see that this use of blackface is wrong because Trayvon was just recently killed, but they fail to see why blackface in and of itself is equally wrong because they do not see or remember the countless black people victimized by centuries of Western colonialism and white supremacy.

I wish the white people who choose to dress up in racial/cultural costumes this season could see the bloodstains on what they wear as people of color do. Then they might make better choices about Halloween costumes, and many other things in their life.

I am figuring out life and faith and taking other people along with me on my journey. Sometimes as fellow travelers, sometimes as hostages.
View all posts by Speakfaithfully →
This entry was posted in Personal Commentary and tagged blackface, cultural costumes, george zimmerman, halloween, race relations, racial costumes, racism, travyon martin. Bookmark the permalink.

213 Responses to Blackface and Bloodstains