Posted on January 26, 2014 by Speakfaithfully 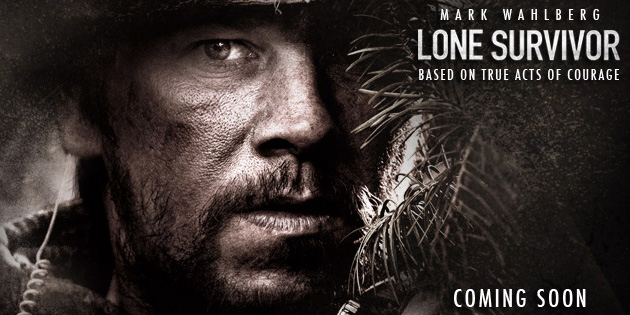 Kill people for your country. It will be so cool.

Lone Survivor is a movie that recounts the events of an ill-fated Navy SEAL mission that happened in Afghanistan in 2005. While on their mission in support of Operation Red Wings, a SEAL fire team was discovered by innocent civilians.  They then had to choose between killing the civilians and ensuring their own security or releasing the civilians, knowing the local Taliban would probably be alerted and this would compromise their mission.  The SEAL fire team released the civilians and were consequently ambushed by a Taliban force. All but one of the Navy SEALs were killed.

Now Lone Survivor has done well at the box office and the reviews have been generally favorable. A number of people on my various feeds have lauded the heroic exploits of the SEALs and the fact that they made the right choice in a tough situation.

The tactic of casting war in a positive light despite its brutal reality is nothing new.  Nations, politicians and those who seek to profit from war been trying to make war honorable and even sexy in the minds of young men for centuries. After all, Dulce et decorm est pro patria mori (“It is sweet and fitting to die for one’s country.”) was not a slogan from this century. No matter where and when you look, it appears societies have always spun tales celebrating the exploits of their heroes and held such people and such actions as honorable and good. Where ancient propagandists used poems and song, Lone Survivor uses cinema and Michael Bay style explosions.

This all has a diffuse but real impact on our foreign policy and the lived experience of other people. Because of the place the U.S. has on the world stage, the values and views of our citizens directly contribute to our nations actions on the world stage. War profiteers in the military industrial complex and the politicians in their pockets can rely on our passive acceptance or even favorable views towards war to allow them to get away with sending our military into unnecessary wars for the sake of their profit. The favorable view of war in the U.S., shaped by movies like Lone Survivor, have very real consequences for the lived experiences of people around the world.

Some might suggest that there is not a problem with movies like Lone Survivor.  After all, even if conceded that war is a moral evil, these men were willing to serve, made the right moral choice in a difficult situation, and some of them paid the ultimate sacrifice for it. Shouldn’t they be honored and respected?

By conservative estimates over 100,000 civilians died in Iraq and 15,000 in Afghanistan.  That number climbs much higher when we discuss people killed by starvation, displacement, crime and disease which are more indirect consequences of war. This death toll also does not reflect psychological trauma, maiming and injuries, and the future cost of wars and conflicts that history has shown will arise from the political instability we have sown in the region.

Lone Survivor also ignores the larger historical context of the war in Afghanistan. Lone Survivor sets up the Taliban as a repressive evil terrorist entity, a sort of War on Terror version of the Nazis. While vilifying the Taliban to act as an antagonist for the heroes of the story (the white Americans) it ignores how the U.S. directly supported the Taliban in the past or contributed to the situation in which they could rise to power.

When considered in an accurate historical and wider context, is this story still something to be celebrated? While I am glad that this SEAL team spared the lives of a handful of civilians the larger context begs me to ask bigger questions. How are those civilians lives now, after we have thoroughly destroyed the entire region?

Our military operations in the War on Terror have directly killed many innocent civilians, even by our own admission. Drone strikes, the standard operating procedure of not slowing down for children in the road (for fear of ambush tactics) and even raids conducted by our elite units have made the deaths of innocent civilians a routine occurrence. Should we only tell the story of the handful of civilians we let live?

In short, Lone Survivor and other examples of nationalistic war porn celebrate cherry picked stories, devoid of any historical or wider context. These stories encourage uncritical nationalism and militarism in those that view it. Such stories encourage people to see war as a noble endeavor and volunteering for the military as a high form of service to others. The larger political and military agenda of the United States, which continues to be the largest purveyor of violence in the world, is supported and allowed to continue unabated in part because of the prevalence of these attitudes in our society. After all, the only thing better for a war profiteer than an uncritical populace going along with war, is a populace that actually values war and thinks it is a good thing.