Cliven Bundy and The Myth of the Free Ride 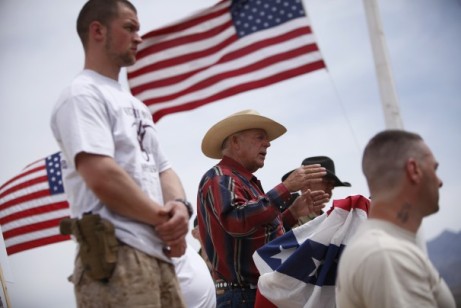 For decades, a white rancher in Nevada named Cliven Bundy has refused to pay taxes to the Federal Government for allowing his cattle to graze on public land. Few took notice of this issue until Bundy actually started paying consequences for this illegal action in the form of the Bureau of Land Management beginning to seize his cattle.

Bundy quickly became a cause celeb and was a convenient rallying point for anti-government sentiment. Several armed militia groups (whose membership seems almost exclusively white) flocked to his aid and the U.S. government ultimately backed down from an armed standoff . The reason Bundy refused to pay the taxes is because he claims his family has a sovereign right to the land (due to all of four generations of his family living there) and he did not recognize the authority of the Federal Government.

A few days ago, while with a New York Times reporter, Bundy expressed his beliefs about black people.

“And because they were basically on government subsidy, so now what do they do?” he asked. “They abort their young children, they put their young men in jail, because they never learned how to pick cotton. And I’ve often wondered, are they better off as slaves, picking cotton and having a family life and doing things, or are they better off under government subsidy? They didn’t get no more freedom. They got less freedom.” (Emphasis mine)

The Larger Issue: The Myth of the Free Ride

The belief that people had freedom under slavery is in itself logically incoherent. The belief that black persons had a family life under slavery is simply not aligned with history. Black adults could not legally marry and lived under the constant danger of their children being sold off as property. The belief that he and his family have some sovereign right to land that originally belonged to Indigenous Nations because they have lived there for a whole four generations is also absurd.

Regardless of how offensive or amusing one finds this situation, the fact that one old white man could hold such logically and historically twisted views in the age of the internet and easy access to information is not the real issue. The much larger issue is that Bundy is not alone in his beliefs, he just happened to air his opinions openly while a national spotlight was on him.

Bundy’s ideology and comments stem from a widespread narrative subscribed to by many in the U.S. Specifically, this narrative suggests that minorities are getting more than their fair share in the U.S. system by mooching off the welfare system or benefiting from outdated Civil Rights legislation that is no longer needed. I call this narrative the “Myth of the Free Ride.”

I have encountered this myth many times and I call it a myth very intentionally. This myth is as disconnected from the real situation and dynamics at play in the United States as Bundy’s comments on race are from logic and history. Despite evidence that it is wrong, this myth is still held onto and pushed because it supports people’s larger attitudes towards race and justice in the United States.

While there are many other issues to talk about in our society I feel this is one we probably should have a few town halls about, or at least some serious dinner table discussion.

While some might think Bundy represents a mere fringe element, I do not think that is the case. In this day and age most people feel they shouldn’t say such things openly, but that doesn’t mean they are not believed or espoused in private, and that doesn’t mean there are not people who are unafraid to espouse these ideas openly. Political correctness might muzzle what we say, but political correctness alone doesn’t change our beliefs.

After all, neither Michigan’s ban on Affirmative Action in higher education in 2006 (that 52% of its citizens voted for) nor the very recent Supreme Court approval of this ban (that passed in a 6-2 vote) came without the support of a lot of U.S. citizens who think a lot more like Cliven Bundy that we’d care to admit.

In my next post I’m going to start Debunking the Myth of the Free ride with statistics, reports and peer-reviewed studies.

I am figuring out life and faith and taking other people along with me on my journey. Sometimes as fellow travelers, sometimes as hostages.
View all posts by Speakfaithfully →
This entry was posted in Culture, Politics, Race and tagged Affirmative Action, Civil Rights, Cliven Bundy, Myth of the Free Ride, racism, taxation, U.S. politics, undocumented immigrants, welfare. Bookmark the permalink.